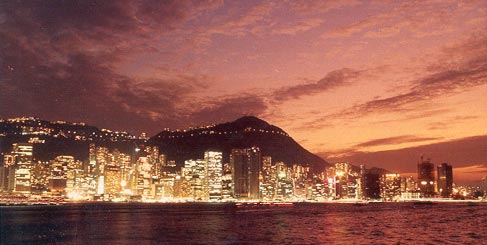 Since this photo was taken in 1985 there have been numerous additions to the skyline and it looks even more impressive today than it did in the mid 1980s.

The last few decades of the twentieth century were, in fact, boom times for Hong Kong and the harbour has been dramatically transformed from the way I knew it growing up in the slower sixties.

There are few cities in the world more spectacular than Hong Kong at night. The marriage of British administration and Chinese enterprise created the miracle of Hong Kong.