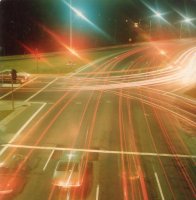 Bulb photography is a technique where the lens of the camera is left open for longer than usual (usually for some seconds).

The camera shutter is often operated manually and is left open for as long as the shutter release is pressed. The effect of this is that the camera often captures images not usually seen by the naked eye (such as the streaks left by car headlinghts, rather than the cars themselves).

More about bulb photography and its history and heritage

The following table provides a brief definition for many of the terms used in describing the techniques of non-digital bulb photography.

You may also like to start (or end) with:

Many definitions have (or will eventually have) links to another page on this site. These linked pages contain much more detailed descriptions along with accompanying examples. They also discuss the signifcance of the term / technique with direct reference to bulb photography (as opposed to photography generally).

The size of the opening that allows light into a lens and thence into the camera.

Fundamentally linked to Film Speed and Shutter Speed as described in Light "Stop".

Photography using the "B" setting on automatic and semi-automatic cameras.

A cable attached to the camera allowing you to open the shutter (push down the button) without touching the camera body. Manual cable releases (my preference due to cost and reliability) usually screw into the top of the shutter release button.

The area of a photograph's frame that is in focus (desribed as being from a minimum distance to a maximum distance from the camera).

The amount of light that the photographer allows to enter the camera and "be exposed to" the film.

A standard for the rating of the film used in the camera.

The scale for rating can be used in mathematical formulae to determine other variables in taking a shot (eg. shutter speed and aperture).

Fundamentally linked to Aperture and Shutter Speed as described in Light "Stop".

The standard unit of measurement for Aperture

An object that is in focus appears to have its physical boundaries defined as crisp and clear - well defined.

An theoretical increase or decrease of exactly double or exactly half of the current exposure. An attempt to standardise and explain the impacts of changing one of the key variables of exposure. Namely:

A "one footed" tripod.

A small single legged device (similar to a tripod) on which a camera can be mounted.

The ones I've seen have a single elastic interlocking segmented leg. I have not had much experience with these as I fear that the leg will bend over the time it takes to capture a bulb photograph thus causing the image to blur. When space and weight is an issue, I prefer a very small tripod, each leg of which is about the size of a ball point pen as this feels much more stable.

The plastic strip (in a non-digital camera) from which your prints are made.

Generally, a negative starts life as the roll of film you take out of your camera. Once it has been processed and returned to you it is usually cut into small strips each one having a few of your shots. When the negative is processed either using chemicals, light and special photo paper OR in an electronic scanner the result is a representation of your photo (either hardcopy print or digitised scan). When you look at a black and white (monochrome) negative with the naked eye it looks like the reverse (or negaitve) of the original view.

The opposite of a negative is called a positive. Unlike a negative, when you look at positive with the naked eye it looks as it looked when you captured the image (assuming you have used the correct exposure settings when capturing the image). (Of course in bulb photography it may look nothing like the original view, but blues should look blue, reds: red etc)

A physical paper representation of your image.

In common terminology a roll of film is either made into prints or slides. Prints are made from a roll of negative film, slides are made by cutting and mounting a roll of slide film (or positive film, or transparency film).

An electronic (digitised) representation of your image.

See also the section of scanning.

A feature on many cameras (even old ones) whereby you set an amount of time that elapses between pressing the shutter release button and the actual photo being taken.

The technique is discussed in the Outdoor Techniques section.

The length of time that the camera's shutter is open.

Fundamentally linked to Aperture and Film Speed as described in Light "Stop".

Square plastic things placed in a slide projector, the monotonous noise and low heat from which is guaranteed to send even the most enthusiastic viewer to sleep. Why is that??? But seriously...

Generally, a slide starts life as the roll of film you take out of your camera. Once it has been chemically processed it is cut into single images each of which is mounted into "slide mounts". These range in material and quality from flimsy cardboard to rigid plastic and glass items.

These can also be processed further into prints or digitised scans.

Slide film and the resulting strips and mounts are referred to using a variety of names including "transparencies", "reversal" and "positives" (as opposed to "negatives").

Early colour photography (up until about the 1970s) was predominantly captured on slide film (the main alternative being black and white prints).

Strictly speaking this is a three legged contraption onto which you mount your camera.

Any structure onto which you can bolt your camera such that it does not move.