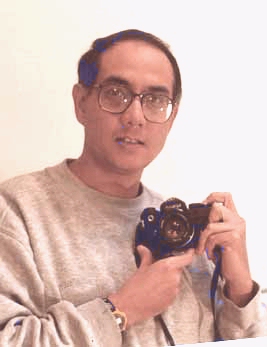 Usuff was born in Hong Kong in 1954, then a British Crown Colony, of parents who were of Indian and Chinese ancestry. He grew up in Hong Kong and studied at the King George V School and later at University in England.

From 1977 he was as an executive officer in the Hong Kong Government. He took up photography seriously in 1983. He was a stock photographer for the Images stock agency in the mid to late 1980s and took part in a couple of group shows at the Hong Kong Arts Centre.

His favourite photographic subject was the Hong Kong cityscape at sunset.

In 1990 he resigned from his post of senior executive officer with the government and left Hong Kong to return to college and travel.

At the New England Camera Club Council Conference in July 1993 at Amherst, Massachusetts, he was introduced to pendulum photography when Richard L Strong gave a slide presentation of pendulum patterns.

He began seriously exploring pendulum photography in 1994 and extensively researched University libraries in the north east of the US in pursuit of what he thought was an undeveloped art form.

His interest in pendulum photography is artistic, commercial and spiritual. At present he is based in Sydney, Australia.