Why Computers Are Not Used to Create Images

I have occasionally shown around small color prints of my pendulum patterns to let others know what I was working on.

A common response was "you used computers!" or "why not use computers?"

I don't use computers to create my images and prefer not to. My images are entirely analogue creations using physical apparatus. Computers are not involved in any way in creating the black and white prints. The only computer involved here is that in my hand held scientific calculator. All images are created by precision crafted apparatus powered by the natural vibrations of freely swinging, balanced, tailor configured and weighted pendulums.

Patterns are all recorded on traditional silver halide film. All black and white images are, for the moment, printed personally using traditional darkroom printing techniques. 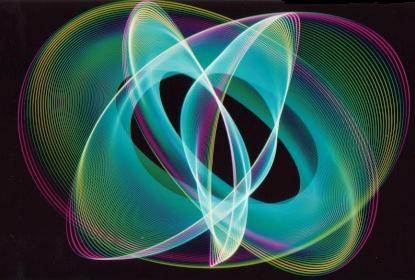 My color work, however, will be digitally enhanced and digitally printed, but both the form and color distribution of the patterns will be a product of physical pendulums. I believe the process by which images are created is just as important as the final result and that there is value in being authentic to natural processes, no matter how tedious it is.

At the core of my approach is a trust of natural processes. I trust nature more than I trust my modest programming skills. It didn't always seem that trust was returned. In the early years of my work film roll after film roll would turn out a disappointment. But despite recurring despondency I persisted. At issue was my understanding of the process, not the process itself. After a few years the maths fell into place and some of the technical challenges were overcome.

"There is nothing that will not reveal its secrets if you love it enough."

Can my pendulum images be created by computers? Sure, once the underlying processes are modelled, anything can be digitally simulated. As a personal choice, however, I would rather work with real swinging physical objects, film and camera rather than sit before a monitor writing code, though that can be creative and enjoyable too! While the results using pendulums are less predictable and less controllable, it has the potential to, on occasion, deliver surprising results that are delicate, elegant and aesthetic.

Without careful modelling, digital creations tend to look plastic whereas with careful preparation pendulum creations have the potential to look subtle, exquisite and organic.

As pendulum images can be digitally created, I ask - why hasn't it been done already?

If my work, on a remote possibility, inspires digital artists to work with digital pendulums, I would ask why they had to wait to see images produced by real physical pendulums before commencing computer simulated images.

By creating pendulum patterns digitally we copy nature. But why copy nature when you can go direct to nature using the physical pendulum? Nature, after all, reflects the mind of God while digital creations primarily reflect the mind of man.

The discussion here as to the use of digital pendulums versus physical pendulums was in some way echoed earlier in the last century when comparisons were made between the 'vibration drawings' produced by mechanical devices and those of freely swinging pendulums. Here is what was said:

"Comparing pendulum figures with mechanical figures, it is easy to get the impression that the latter involve more accurate movements than the former, but this is quite erroneous. The pendulum expresses facts to which the mechanism is dead. The chief characteristic of mechanical figures is deadly rigidity, but that of pendulum figures is vital fluency; whilst the incomparable accuracy of pendulum motion is unequalled by that of any mechanical contrivance. The fixed mechanism incorporates only what has practically been predetermined by the operator; the fluent pendulum gives ever new results with surprising details beyond the reach of imagination to conceive."

The role of computers

Nevertheless, computers play an invaluable role in my work. A computer simulation enabled me to eventually arrive at the required mathematical formulae and I need to revise my Visual Basic programming to create simulations to aid and guide my future work.

Another plus for computers - images can be created with digital pendulums where it would be difficult or completely impossible with the corresponding physical pendulums.

So in the end I see the digital path and the analogue path as two paths that complement rather than compete with each other. If digital artists ever create vibration patterns modelled on the pendulum I will learn from their work, and if the modelling is sophisticated enough to incorporate all the nuances, their creations will be beautiful.

But for the moment I still prefer to use physical pendulums as a personal choice.