This relationship applies where the amplitude (size of swing) of the pendulum is small. The period of a pendulum here is all but constant and depends on the length of the pendulum and the strength of gravity. Huygen also invented the pendulum clock in 1657 and the pendulum has been a mainstay of clock mechanisms ever since.

In time because it is an accurate, though not completely perfect timekeeper.

In space because if unimpeded and executing non elliptical motion will swing in an absolutely constant direction with reference to the stars.

This was shown by a French scientist, Jean-Bernard-Leon Foucault (1818-1868) who lived about two and a half centuries after Galileo.

In 1848 Leon Foucault made an amazing discovery. He noticed that a long, skinny metal rod kept vibrating in the same direction despite being gripped in the chuck of a lathe which slowly rotated. He then made a few brilliant intuitive leaps which, together with supporting experiments, led him to conclude a pendulum swung in a fixed direction with reference to the Universe.

A conical pendulum, once set in a straight line (non elliptical) motion, will swing in a plane with reference to the stars and will ignore the rotation of the earth, the sun and even the Milky Way, our home galaxy. It will maintain a constant plane of swing with reference to the distant stars. 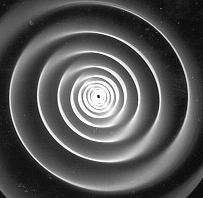 He demonstrated his discovery using a long pendulum at the 1851 Paris Exhibition. From the centre of the dome of the Pantheon in Paris he suspended a 200 feet steel cable attached to a large iron ball raised just off the floor. On the bottom of the ball was a spike which just touched the sanded floor. The swing of the pendulum was thus recorded by marks in the sand.

A large hushed audience watched the momentous experiment as the pendulum was released in a straight line. With the passing minutes and hours the plane of swing of the pendulum was seen to slowly rotate. For the first time in history the movement of the earth was witnessed in this way. What was happening was that the pendulum was keeping a fixed direction of swing while the earth rotated under it.

Such pendulums have been known as Foucault pendulums ever since and the public demonstrations of it continue to this day.

This dramatic experiment caught the public imagination and is usually remembered for proving the earth rotates rather than that a balanced pendulum with a symmetrically elastic line faithfully maintains the direction of swing it's given with reference to the universe.

In short the pendulum is a tool that is accurate in time and space.