A second clue came from this time from a scientific direction - the field of psychopharmacology and the subjective visions of those undergoing altered states of consciousness induced by psychoactive drugs such as LSD.

Subjects here report seeing geometric forms in their hallucinations. Because there are commonalities, or a constancy, between such forms irrespective of the particular psychoactive drug involved, they are termed "form constants".

Heinrich Kluver, an experimental psychologist at the University of Chicago was the first to explore form constants in the 1920s and his work was continued by Ronald K Siegel of UCLA in the 1960s. It was found that four basic geometric forms were seen: tunnel, spiral, cobweb and lattice (grid). It didn't matter what the particular psychoactive drug was - LSD, marijuana, peyote etc - the same forms were still seen.

The discoverer of LSD himself, Albert Hofmann, reports seeing form constants when he ingested LSD for the first time in April 1943. 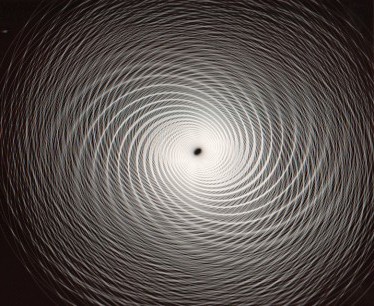 "Now, little by little I could begin to enjoy the unprecedented colors and plays of shapes that persisted behind my closed eyes. Kaleidoscopic, fantastic images surged in on me, alternating, variegated, opening and then closing themselves in circles and spirals..." (Ref 2).

These form constants are nothing new - archaeologists report they are depicted in rock art dating back to Upper Paleolithic times (Ref 3).

(Amazon book link) chapter 1 - How LSD Originated at http://nepenthes.lycaeum.org/Drugs/LSD/ProbChild/Chapter1.html
3.
"The Signs of All Times" by J D Lewis-Williams and T A Dowson, Current Anthropology, V29, no. 2, April 1988
BULBPhotography.com BULBPhotography.com
© bpresent computing or the artist whose work is depicted
bpresent web design and hosting