Pendulums are a natural tool for creating vortex images. The vortex is a form of pendulum pattern.

Does the vortex form have any mystical significance?

One researcher on astral projection in the 1960s, Robert Crookall mentions using an image of a "whirlpool" or of "a circle, or a series of circles, or smoke rings etc." (Ref 14) as a method of projection.

Another technique put forward by Alan Guiden for achieving the out of body state, called the "AG Dervish Method" also uses the image of a whirlpool once the vibrations or "vibes" are experienced.

In the description of another technique that uses the image of a vortex to astral project it was said the "dark swirling vortex enveloped me, that looked like a smokey cloud of energy suspended in space. A pinpoint of light formed in the center of it. I moved through the vortex toward the light." (Ref 16)

The third eye, or Ajna chakra, is supposed to mediate psychic experiences, including out of body experiences (Ref 17). Interestingly, Dr Douglas Baker states that the "helix or spiral" is the "Symbol of the Ajna, aroused through focus of the mind when there is an inward or centripetal movement of images. Relaxation of the mind with parasympathetic activity reverses the motion giving centrifugal movement of images." (Ref 18) This idea of a counter rotating movement is taken up below. 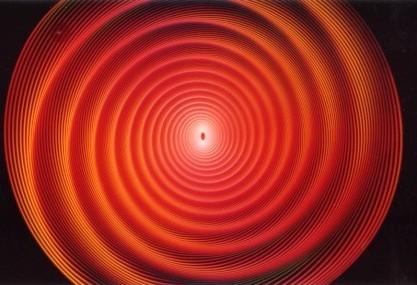 The idea of entering a portal to astral project can be found on the web. One webpage proclaims "Here is the Portal to another Dimension... Stare at the orange hole in the middle and after a few seconds you will feel the outer bands of color pulling you into the portal. These magnetic bands are charged with a force to assist you in your journey through the portal into another dimension." (Ref 19)

What is the Mystical Significance of the Vortex?

Look into the spiral and be transported to another dimension - that's what the above says. Some see it as a joke. But it's undeniable that spirals and vortices do evoke mystical connotations in the popular imagination.

The cover art of books on psychic powers, time travel, mysticism etc. often depict the image of a spiral. They even appear in films with an otherworldly theme - remember the spiral ceiling in Casper the Friendly Ghost or the spiral stair case in Jumanji?

I have found little specific information on the mystical significance of the spiral other than general philosophical explanations, which I found vague. The most specific information on the mystic vortex I found, is from Dr Robert J Gilbert. Dr Gilbert states "the vortex is the natural form by which energy moves most efficiently on every plane and level of existence" and that "seen from the inside, these vortices appear as tunnels...commonly reported by persons who have undergone near-death experiences" (Ref 20) Dr Gilbert considers concentric circles as two dimensional patterns which represent and create a three dimensional vortex form which is the primary form of energetic movement between the physical world and etheric energies and spiritual planes.

Interestingly the Merkaba, an energy field around the body, as taught by Drunvalo Melchizedek, is said to comprise counter rotating fields where the rotation rate in opposing directions is in the ratio of the Fibonnaci sequence (Ref 22).

An analogy on the physical plane for this idea of vortex movement involving a transfer between two compartments is where two bottles are taped together at their openings and water passed from one to the other. For water to flow it requires to take on a vortex motion (Ref 21).

Another point of interest with counter-rotating spirals is that it produces a visual illusion of movement (Ref 23). I don't know if there is any significance to this, but thought it interesting enough to mention.

14.
"The Techniques of Astral Projection"

(Amazon book link) by Jerry Mulvin, 1991, p7.
17.
"The Pineal Gland - The Bridge between the Physical and Spiritual Reality" at http://www.alphaomega.se/english/pineal.html (site no longer exists?)
18.
"The Theory and Practice of Meditation"