Pendulum Patterns as Yantras? (Part 6 of 6)

How can pendulum patterns serve us? Are they just interesting designs of curiosity value or do they have a deeper purpose? Can they be used as an object of visual meditation, scrying or gazing to assist in inducing mystical states? In other words, if form constants appear perforce in the hallucinations of subjects undergoing an LSD experience, can the visual sighting or imagining of form constants induce the same effect under certain conditions?

The idea that visual images can somehow produce a shift in awareness of some kind is not new. In the Eastern tradition there are the mandalas and yantras. Yantras are inner doorways. A clear explanation of it is given by Richard Hittleman as follows.

"To the casual observer, yantras may appear as little more than interesting designs...however, yantras have the utmost significance: they are mystical symbols of higher planes of consciousness. When the meditator visualizes yantras in the prescribed manner, he becomes attuned to the vibrations embodied within them. Striking these sympathetic vibrations, his consciousness is drawn to those planes of which the yantras are graphic representations (Ref 24).

Our visual faculties have been described as "an intelligence so great that it occupies nearly half of the brain's cortex" (Ref 25). If our aural faculties can induce altered states, such as with the repetitive beat of the Shaman's drum, why not the visual faculty? An interesting webpage which discusses how various forms of art have a positive effect on us is Mark Levine's article at http://t-hyp.com/ar-marklevin.html entitled "Vibrational Healing with Art, Music & Religion" (site appears to have been deleted).

I have created many pendulum patterns over the years but have not experienced any mystical effect from them, though I did have an inkling of one when I saw Richard L Strong's patterns in 1993. As I mentioned at the beginning of this paper, only very specialised forms of pendulum pattens by way of form and color may have any mystical effect. For any "effect" to take place I would guess certain conditions would need to be met, perhaps along the lines of the "set and setting" in the drug parlance, the "state" of the observer etc.

I have other "clues" and areas of discussion in this area of consciousness and visual patterns which time has not permitted me to include here for the time being.

It appears at least certain forms of pendulum patterns have a mystical association to them. Mystics have said everything in the Universe is just vibrations. Pendulum patterns are created on the physical plane by vibrations and may correlate to extraphysical phenomena which also have a vibrational basis. Like the authors of the book Thought-forms who stated in 1901, exactly a hundred years at time of writing, I too suspect there is something "valuable" here. 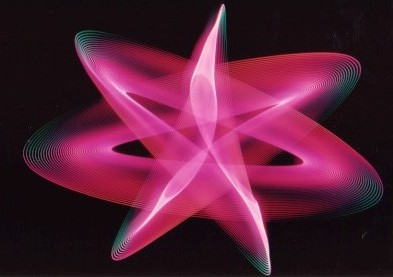 Thankyou for visiting these pages.

The process of writing it has helped me be a little clearer on the subject. These pages are a work in progress and I know many unanswered questions are raised by it. If you have any ideas, comments or information to share I can be reached at genieomar@smartchat.net.au