It may come as a surprise that pendulum patterns have a mystical connection. The study of pendulums is a mainstay of orthodox physics while it's commonly known they also have a metaphysical association in their use for divining, dowsing and hypnosis. But here I'm referring not to pendulums themselves but to the patterns created when they are swung and the movements captured photographically.

Some forms of pendulum patterns have been cited by clairvoyants as resembling otherworldly entities known as "thought-forms" while the vortex form of pendulum patterns appear in the visual hallucinations of some of those who have ingested consciousness altering drugs or who are experiencing a mystical experience, like dying. The image of the vortex is also mentioned as serving as an aid in seeking an out of body projection.

This paper discusses these and other clues that suggest pendulum patterns, at least some specialised forms of them, have a metaphysical association and possibly a metaphysical use in serving as yantras, or visual aids, in attaining non ordinary states of consciousness. Please note that most or nearly all pendulum patterns probably have no metaphysical use. Only a very select few where the mix of frequencies and amplitudes is just right. This paper refers to only these patterns. 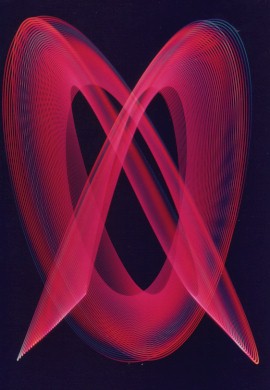 Be warned - this paper draws on mostly non academic sources, is a bit speculative and doesn't come to a firm conclusion. But though the destination is unclear, I find the journey fascinating.

It is said that our thoughts and emotions create 'forms' in other dimensions. These forms have shape and color and how long they last for depends on how intense the thought or emotion is. I've never seen them but some clairvoyants have. They see them as real entities in what is said to be the lower mental and astral planes, dimensions beyond ours. The classic reference on this subject is the 1901 book "Thought-Forms" by Annie Besant and C.W. Leadbeater, two reputed clairvoyants and founding members of the Theosophical Society.

In this book they mention that the patterns created by a pen driven by knife edge pendulum apparatus produce "a most wonderful series of drawings... and the similarity of these to some of the thought-forms is remarkable". The authors felt they were onto something important and continued "we are sure that a wealth of significance lies behind this fact...it will open to us a new and exceedingly valuable field of knowledge" (Ref 1).

Despite their optimism there has as yet not been any follow up to this book and it remains the only reference on the connection between pendulum patterns and thought-forms. This was my first clue that pendulum patterns had any metaphysical association.