The pendulum is probably the simplest of any tool to use in creating patterns. It requires no batteries to operate, it works every time, obeys clear scientific laws and is a subject firmly rooted in the scientific tradition.

The study of the pendulum forms a staple part of any basic physics curriculum and continues to be the subject of papers in the American Journal of Physics.

The starting point for any history of the pendulum is Galileo, although others before him must have also studied the pendulum. Galileo Galilei (1564-1643) holds a special place in my heart. He is the father of the scientific method, an independent thinker who, at great personal risk and sacrifice, defied the Church and relied on his own rational processes.

He was the giant on whose shoulders Newton stood.

As well as studying the phases of Venus and discovering the moons of Jupiter Galileo studied one of the simplest of earthly phenomena - the swinging pendulum. Legend has it that around 1583 during a service in the Pisa Cathedral a swinging lamp caught his attention. He timed its swings with the beat of his pulse (they didn't have stop watches in those days).

He observed that how long it took for the pendulum to swing back and forth, the period, remained about constant even when the swings got smaller and smaller. Galileo went on to study the pendulum in more detail and much of what we now know about its basic properties was first discovered by him. 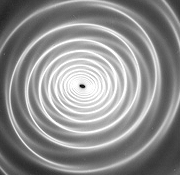 Kepler's second law of planetary motion, that a planet's orbit sweeps out equal areas in equal times, can be illustrated by a pendulum (Ref 1). Pendulum motion can't be used to illustrate Kepler's first and third law, however.

Interestingly, Galileo didn't get it completely right. He got one thing wrong in that he thought the period of the pendulum (how long it takes to swing) is completely constant regardless of its amplitude (Ref 2). A pendulum's period is affected by its amplitude, albeit to a tiny degree if the amplitude is small. Galileo was human after all. Maybe such a law was so beautiful he believed it to be true.