What is Pendulum Photography?

Pendulum photography is where the pattern created by swinging pendulums is recorded using a light source and camera set on a long time exposure. In the simplest case a point light source is attached to a weight which suspends from the ceiling by a single thin line.

A camera is placed underneath the pendulum and the room darkened. As the pendulum swings its motion is recorded by the camera as a moving line which traces out a swirling pattern. One magazine article called the resulting images 'star tracks', and the analogy is in fact apt.

The same principle is used to capture the streak of stars (in effect the rotation of the earth) across the night sky.

From its earliest days photography was referred to as the 'pencil of nature'. This is what a single point light source, freely swinging pendulum literally is in photographic terms, a pencil of nature. Specifically, a pencil of light. The pendulum's swings may appear chaotic or haphazard from second to second but when cumulatively recorded by a camera with an open shutter, wonderful regular patterns sometimes emerge.

Even when the patterns appear irregular or haphazard, they are in fact still precise, although their regularity is hidden because it is too slow to emerge given the pendulum's rate of amplitude decay.

It's amazing that something so simple as a pendulum, which is essentially a weight suspended from a line attached to the ceiling or some other fixed point, can produce something so wonderful.

Pendulum pattern creation as an artform is, in fact, not a recent novelty.

It has a surprisingly long history starting in the 1870s in Britain when patterns were drawn by the action of a compound pendulum driven capillary pen resting lightly on a flat paper surface. 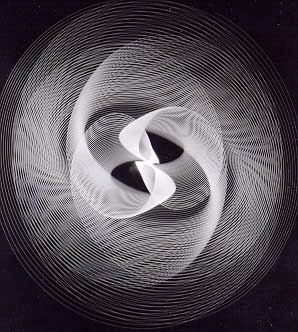 Although popular interest in this pastime declined in the early twentieth century, it was never forgotten and it made a transition to popular photography in the late 1940s (Ref 1). The use of pendulums is today an established special effects photographic technique (Ref 2 & Ref 3).

However, instructions describing the technique tend to be simple and brief and most are probably unaware that it is an artform with a history.

The term "pendulum photography" is not one that I remember being used before. I need a term that describes my work and I think it's an obvious choice given that it says it as it is - photography involving the use of pendulums.