These images are presented in chronological order (the date they were taken) and represent two of the three different techniques I have tried to date:

The photo below is a bit of an orphan as it was my one and only attempt at using superimpostion as a means of capturing a partial exposure.

This was taken with my old Voigtlander. Newer cameras (including my Nikon F80s) would make this considerably easier as it's possible to exposure a single frame more than once without touching the camera body (so long as you have a cable release). That said, I haven't tried it and the user's manual tries to dampen your hopes for success.

"In some cases, frames may shift slightly in multiple exposure. In particular, film advance becomes unstable at the beginning and near the end of a film roll so multiple exposure is not recommended.".

One thing I have not attempted is to take a shot of the main subject (the person) on a black background and a shot of a location in which to place them (but my immediate though on this is "Why bother?". 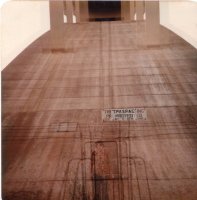 Self portrait, Gladesville Bridge, Feb 1979
Voigtlander Perkeo I
This is a classic & typical example of what can happen when you try to take a superimposed shot with a common background.
What I was trying to do here (for the first time ever) was to have me in the photo as a ghostly image. Simple, one shot at half the normal exposure with me in it and then the same again but this time with me not in it.
In one sense I succeeded (the exposure is not too bad) but, obviously, I did not get the desired result.

Ambient Lighting (with or without movement)

I gave up on the idea of superimposition very quickly and started to experiment with partial exposure of the subject in order to achieve the effect of a tranparent human being (a ghostly apparition).

I had a lot of fun doing some of these (as well as those taken with a flashgun).

The technique (in its simplest form - a subject in a moderately well lit room) is really very simple. Work out the correct exposure for the background, mount the camera on a tripod, seat your subject in the frame, open the lens and, part way through the exposure, get them to change location or quickly exit the frame.

I regret that I did not follow the golden rule when taking many of these photos - I did not make a note of the aperture or the shutter speed. It was my habit to take most bulb photos at f16 (the limit of my old Voigtlander). More often than not, it was dark and I was not usually in a fit state to be worrying about formalities such as note taking! 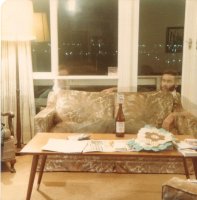 Man on couch, Forestville, Oct 1979
Voigtlander Perkeo I
It looks as if Mark moved once only during this exposure and even though it was probably half way through, one image is much clearer than the other as it has a dark background.
You can just make out the tripod stem (and I think also my hand) towards the middle of the window.
I don't think there was any significance in the placement of the bottle of "Tooheys Old" or the "Camel Plain". 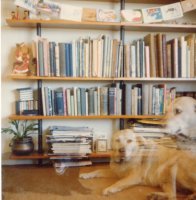 Baloo and Trudy, Forestville, Jan 1980
Voigtlander Perkeo I
My trusted friend and companion Trudy (the golden labrador) and the dog from next door (black corgi labrador cross). Trudy was far more obliging (and obedient) than Balou and remained in the shot albeit a bit fearful of being in trouble.

Self portrait, Cremorne, Aug 1980
Voigtlander Perkeo I
Probably doesn't really belong on this page (another orphan) as I'm not sure if this was a bulb shot or not. Given what I recall about the flat where it was taken (it was over 25 years ago) I suspect it was at least on a tripod.
The light source for this was the sun, partially shaded by trees, shining through a very uneven piece of of frosted glass. 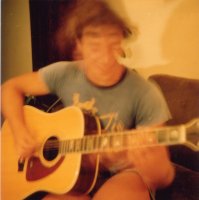 Self portrait, London, 4th Apr 1986
Olympus OM-1
The chair had a towel draped over the back of it and a slight rocking mechanism. Hence, my shoulders are lower than the back of the empty chair.
I started and ended this shot with me behind the camera.

Man stumbling down street, London, 1987
Olympus OM-1
No idea about exposure on this one. Taken (of me) by my ex-girlfiend with the camera set on auto (I guess).