On this page I attempt to describe, as simply as possible, how you can go about creating simple bulb photographs. 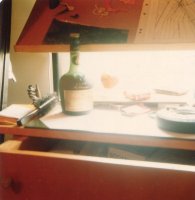 I also provide a "Trouble-shooting guide to bulb photography" on another page in the hope that this will be an aid to learning once you've started.

One of the simplest bulb photographs to take, and a very good place to start, is inside the place where you live (assuming you have electric light).

For the following exercise, you will need three pieces of camera equipment:

If you do not have a tripod or a cable release then you may still be able to take a standard bulb photograph. The technique is discussed in the Outdoor Techniques section.

It's also a good idea to have a stop watch or some watch with a second hand, but for this exercise you can simply count elephants if you want.

The photo above was taken with one low wattage globe in the room (shaded). The flourescent desk light is the major light source.

Using the photo above as a guide:

For the sake of experimentation, assuming the camera is about one metre (3 feet) from the subject (as in the above photo) and you have set the aperture to f16, take three shots lasting 20; 40 and 80 seconds.

While taking each shot it is imperative that you do not touch the tripod, the camera or shake the floor or object on which the tripod is placed. If you do, and the camera returns to exactly where it started you'll probably be okay. But, more likely, it will come to rest somewhere (ever so slightly) different to where it started and the result will be a double image.

That's about all there is to it really.

You can try the following even before you've seen the results of your first experiment.

Adjust the aperture to a lower number (say f4). This allows more light to come into the camera more quickly. In other words you need to compensate by reducing the length of time you leave the lens open for. Given that f4 is 4 "light stops" lower than f16, that means you could, in theory at least, take 3 shots of 5, 10 and 20 seconds and wind up with three shots that look the same as the first 3.

Try it and compare the results.

The first and most obvious difference will be seen in the depth of field. When you are this close to your subject (at arm's length) a change of 4 stops of aperture has a significant difference in how much of the shot is in focus.

Depending on what you are taking a shot of you will most likely prefer one aperture over the other. If it is a single item as a subject you will want a small depth of field.