This page is a bit of a hotch potch at the moment and will most likely be expanded (firstly) and then (eventually) broken down into smaller parts.

Getting the right light mix

When I took this photo by the light of nothing more than a full moon (with minimal ambient light - being about 400 kilometres from the nearest major settlement), there was only one street light visible and I knew that I had to avoid it (practice). (It's not visible as it is just outside the frame on the left.) 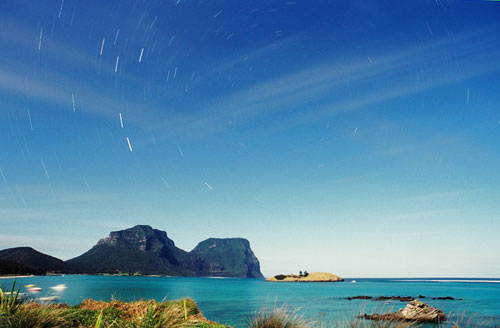 If I had not avoided the street light, what you'd see in this photo would be a pretty significant yellow / white ball of light at least as large as the rock in the water in the right foreground. There would probably also be glare spots elsewhere.

I was pretty annoyed because it meant that I had to place my subject (the mountains) to the left of centre. As it turned out, the camera wound up pointing almost due south (luck)! I was very happy! (Testament that practice, and luck, makes perfect - or at least made me very happy with the result in this case).

Shots without a tripod or cable release

You may still be able to take a standard bulb photograph without a tripod if you can place your camera somewhere stable and you have either:

The shot on the right was taken without a tripod. It's not such a great shot but it clearly shows the risk you run (or the effect you may wish to create) if you place the camera on a stable base. I suspect that I used a cable release as it's a fairly long exposure (rising moon in the wee small hours).

A feature that is available on many cameras (even old ones) is a self-timer. This allows you to set an amount of time that elapses between pressing the shutter release button and the actual photo being taken. It's always been popular for holiday snaps as it allows you set up the camera and then run into the shot and have your photo taken in front of the pyramids or Eiffel Tower etc.

In bulb photography is much the same:

The benefit of this in bulb photography is that the camera can remain untouched while the lens is open - crucial to an unblurred long exposure photograph. 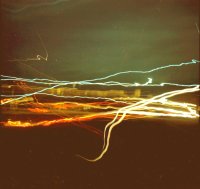 Another type of bulb photo that does not require a tripod is one that is deliberately blurred. For example, the shot on the right was taken standing in a park.

As a car came from my right I would follow it, attempting to have subject move slowly from right of frame to left of frame (hence white light from the headlights on the right, a red and orange light from the tail lights / indicators on the left).

There is one type of shot I have always wanted to take that I have never gotten around to. A shot looking forward from a yacht under sail under a full moon. I used to have ample opportunity to take this kind of shot but alas no more. The idea is to mount the camera onto a tripod, which would probably have to be bolted to something stable on the boat. There would be enough light to show both the boat and the water (the rougher the better as there would be more white wash). In theory the fittings and deck etc would be in focus; the sails would clearly discernable (if not in focus; but the vessel would be surrounded by... something I guess akin to white below fading to black above.